Like many of you, I tuned in on Sunday night to watch Iyanla Vanzant's new show "Iyanla, Fix My Life". In this episode, she sat down with "Basketball Wife" Evelyn Lozada to discuss her behavior on the show, her marriage to Ochocinco, and her numerous issues with anger management. 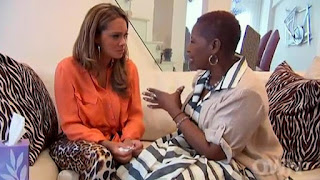 I have been a fan of Iyanla's since she first began appearing on The Oprah Winfrey Show back in the 90's. I was one of the millions of women who ran out and purchased her book, "Yesterday I Cried", as I dealt with my own failed relationship issues at the time. Reading that book truly changed my life. The wisdom Ms. Vanzant poured out was like balm for my wounded soul. I had never imagined that someone could "know me" without ever meeting me! Yet, as I read that book, I felt like a beloved Godmother had sat me down and peeled back all of my layers of pain, and drama and anguish to reveal the woman I was truly destined to be. So, I watched knowingly as she sat down and did the same with Evelyn face to face.

I'm sure we all high-fived the TV screen a few times - when Iyanla showed her video footage of Evelyn's hoodrat behavior; when Iyanla pointed out that Evelyn had been rewarded for being a THUG among women and would have to pay a price for that; when she reminded  Evelyn that she had TOLD Chad to buy condoms if he felt that he was going to cheat while out on the road. But when I got through "ganging up on her" with millions of other women who were watching, what struck me the most was that so much of what Evelyn is guilty of mirrors exactly what MANY of us have gone through!

How many of us have tolerated disrespect from a man?

How many people are afraid of not being loved?

How many women are so caught up in their outward appearance that they think it's all they have?

How many women are so broken by the absence of their father that they subconsciously seek out men just like him?

Like Evelyn, I married someone who was cheating on me before I got married, and I had the nerve to expect that behavior to stop after we got married. I have been guilty of looking for love in all the wrong places. I've barrelled through life without acknowledging past hurts, only to see those issues reemerge later in my life. Just like Evelyn, many of us have wrestled with the same demons. The only difference is that she did it in front of cameras, while many of us did it behind closed doors.

I once harbored a severe disdain for this woman based on her drink tossing, bottle throwing, neck twisting, table jumping, expletive-filled tirades. She exhibited terrible "mean girls" behavior toward one victim after another, even resorting to hiding dead fish in one woman's hotel room. I felt that she was an example of the worst aspects of womanhood. She was. But after watching Sunday's episode, I kinda get it now.

Iyanla did a great job of sifting through the debris in Evelyn's messy life to get down to the nitty gritty. She proved something that I've recently learned in my own life  - that the folks who talk the loudest and curse and yell at other people are the most insecure. All of that bravado is actually a facade, an attempt to cover up immense emotional pain and insecurity. Iyanla broke it all the way down, and she got to the core of Evelyn's poor behavior and bad choices. 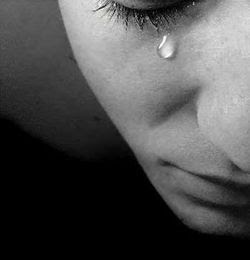 I hope that as women across the country watched the episode they did some soul searching, some self inventory, and realized that we all have gone through some crazy periods in our lives. I admire Evelyn's courage in owning up to her mistakes. I also admire her bravery for doing it in the public eye. Sure, she needed to do an "image overhaul" after months of relentless bad press. I'm sure that she was at least partially motivated by a desire to redeem herself in the eyes of viewers. But I also believe that she was ready to do some real work on herself, both behind the scenes and in public. It's never too late to right your wrongs. The time she spent talking to Iyanla was a huge first step in the right direction. And I applaud her for that.

Over the weekend, I had a conversation with a friend (not a term I use loosely anymore) about how true friends must be willing to tell each other the truth about themselves. Too many women are surrounded by a gaggle of cheerleaders, even in the midst of terrible behavior. When our sistah-friends tell us about their scandalous behavior, about their meanness toward other women for no good reason, about their willingness to accept disrespect from men, we shouldn't just let it go. We have a responsibility to tell each other the truth out of love. It's time to stop being cheerleaders for our girlfriends who are behaving poorly. REAL friends won't turn a blind eye to your mess. They'll point it out to you and help you clean it up.

It makes me sad for Evelyn to know that the other women on the show who she referred to as her "friends" never had the kind of heart to heart with her that Iyanla did. Her behavior was slammed by many viewers, by Star Jones, and even Wendy Williams felt compelled to speak on it. But not one of her so-called "friends" said a word. That has to change.

Let's commit ourselves to keep it real with our friends if we really love them. The next time your girl is bugging out and disrespecting herself (or allowing her man to disrespect her), or lashing out at other women for no good reason, or whatever the case may be - love her enough to tell her the truth.

After all, as Iyanla so beautifully stated, "I am not my sister's keeper. I AM MY SISTER."

Posted by TracyBrown at 3:59 PM