On Friday night, along with millions of other viewers, I tuned into watch a man by the name of Nik Wallenda walk a tightrope across Niagara Falls - from the USA to Canada - something that had never been done before. My initial reaction to hearing about his plan was typical - I rolled my eyes, sucked my teeth and thought, "Here goes another David-Blaine-style attention seeking lunatic, trying to get famous off of something dumb." I spent the day in Manhattan, capping it off with a quick bite to eat (and a couple of martinis) at a sidewalk cafe in Chelsea. I did a little shopping and then headed home to relax on what was a beautiful Friday evening. I turned on the TV, which was still tuned to ABC because I'd watched my girl Robin Roberts on Good Morning America before leaving my house that morning. And there it was! This man was being interviewed about why he thought he could successfully cross the huge span of rushing water on a tightrope.

"I have the skill to do it," he explained. I rolled my eyes again and thought this cocky guy is gonna kill himself trying to get into the record books. But then he said something that made me pause.

"I put my faith in the righteousness of Jesus Christ. I've worked hard to get ready for this day. So with the skills I have, and my savior Jesus Christ, I have faith that I can do it."

That literally froze me where I stood. Could this man have faith so strong - faith in his gift and faith in the Lord - that he could walk a tightrope that was merely inches wide across Niagara Falls??? I grabbed a snack, got cozy in my sons' room, and was riveted as he took his place on that tightrope. 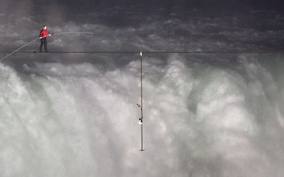 Ok. This man says that he is holding on to his faith in God, and his skill as an experienced tightrope walker and that he is going to make history. I'm watching. Are you?

The responses were varied. One "friend" replied "I'm watching." Another said, "Heck no! Hours of TV wasted on that mess!"

I watched as he slowly moved along that rope. I listened as the newscasters explained that the rope was 20 stories above the Falls, that the man's great grandfather had died attempting a similar feat. They explained that at the center of the mist-filled deluge of water visibility was low, the winds were high and the water would splash in his face like a fire hose at a distance; that he would have to keep his balance despite these obstacles; that for the first leg of his journey, he'd be walking in essence 'downhill', and that this was the most difficult part, according to Nik. 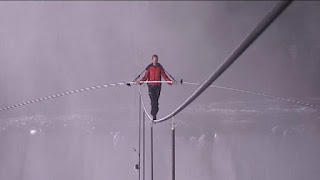 But then the newscasters cut to audio of Nik's own voice as he moved expertly across the rope and directly over the open mouth of the treacherous Falls.

I turned the volume up and listened as he acknowledged the mercy and protection of God every step of the way. In a world where praying in schools is prohibited, praying at work is frowned upon, and praying PERIOD draws stares and looks of disapproval, here this man was doing it for all the world to see at a sensational moment in history! 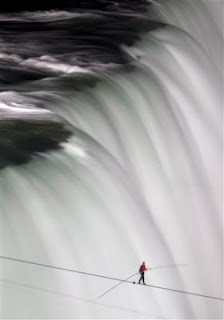 "Oh my gosh, it's an unbelievable view," he gushed. "This is truly breathtaking."

The man was literally on top of the world! I held my own breath as I watched him, now in the center of the rope. The crowd cheered him on. His father spoke words of encouragement to him via the earpiece he was wearing. Nik kept right on praising God.

I found myself praising God right along with him! My sons gave me the side-eye.

"Ma...you alright?" my 16-year-old asked.
I nodded. "Yes! I explained. He is doing this with God's help! Jesus is walking alongside him."

My oldest son ignored me and kept watching the developments.

That was my chance!

"The devil is MAD right now!" I proclaimed. "This man is exercising his faith on live television. The Bible says "Pray without ceasing". He is boldly asking God the Father and the Son and the Holy Spirit to walk with him, and help him succeed and he is DOING IT!" I could barely contain my enthusiasm. "The Bible says that we can have anything we ask for in faith and in Christ's name. He is glorifying God with his gift to walk the tightrope. He is pissing the devil off by showing how powerful God is, how we can do anything when we exercise our faith." 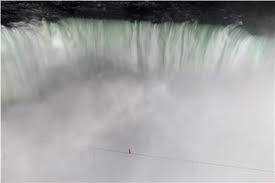 "[[ THANK YOU JESUS ]] I'm cracking up listening to my Brother walk across Niagara Falls. I'm sure the television networks had no idea he would be praising God all the way across!!!"


[In fact, I noticed in the news coverage after the broadcast, Nik's prayers were censored out. No mention of the praying was reported at all on most news websites, blogs and newspapers. *side-eye at the media*]

But it didn't matter what the media's reaction was. The live broadcast of this man exercising his faith reached millions of viewers! For once, Live TV worked against satan and not in his favor. Nik reached the center of the rope, and the wind and misty conditions, the darkness - it was all visible even on TV. You could literally see that he was walking through the 'storm', still praying with every step he took.

As Nik Wallenda neared the end of his rough journey, he took a knee, pumped his fist at the crowd and I cheered from my home in Staten Island, NY, as if he could hear me, too, encouraging him to keep going. 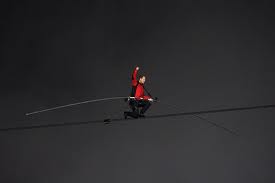 Finally, after what felt like forever, Nik scurried the rest of the way across the wire, into the record books and into the hearts of many (myself included). I wasn't mostly impressed by his tightrope skill, but by his faith, his fearless determination to give honor to God for what many would have selfishly taken credit for.

It made me reflect on my own life - on the "balancing acts" we all must embark on; the storms we all must weather in life; the goals we set for ourselves and fear that we won't be successful.


“I think that’s what life is about.  We all go through challenges. But once we get through them, we look back and say look how much our lives have changed by going through that challenge,” Wallenda said.  “If you can focus on the other side, when you look back it makes it that much easier.”


"I hope what I do and what I just did inspires people around the world to reach for the skies," he said.

He told reporters that he wanted people to chase their dreams, even when people tell you that you can't do it, even when the odds were stacked against you. He spoke of the newscasters, and weathermen who had lamented that the winds were heavier than usual, that the mist was blinding. He had pressed on anyway. He had placed his fate in God's hands and trusted Him. And Nik emerged triumphant!

Whether this guy fades into the background or becomes a "celebrity" as a result of his walk last Friday, his journey has inspired me. When we use our God-given gifts coupled with our unshakable faith, God will make all of our wildest dreams come true. If we ask for His help while we're weathering our storms and trying to stay on track, He will answer our prayers and walk with us as we go through darkness, troubles and treacherous conditions. He is literally our bridge over troubled waters.

Some may not have seen the situation as 'that deep'. But for me, it was a moment of confirmation that if we walk by faith and not by sight, anything is possible!
Posted by TracyBrown at 3:00 PM