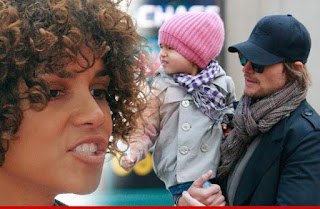 Does it really take $20,000 a month to raise a preschool child? If so, I owe my children an apology, since I raised them on a very small portion of that. Seems everywhere I look these days - well... in every bit of celebrity news I read - there's some ex-wife/ex-husband (or baby mama/baby daddy) collecting these huge amounts of child support from their famous co-parents!

Diddy. Nas. Charlie Sheen. Russell Simmons. Britney Spears. They've all been leached off of by greedy men and women that they once loved enough to procreate with.

I'm not saying that having a child isn't costly. But just last week, Parenting Magazine released a figure that roughly estimates the cost of raising a child in America from infancy to adulthood at roughly $285,000. Many of the celebrities' co-parents are getting that full amount in just a matter of MONTHS!

Model Linda Evangelista asked a judge for $46,000 a month for her 5 year old. And now a judge has awarded male model Gabriel Aubry $20,000 a month to help support the daughter he had with Halle Berry.

This judge is a definite candidate for my Side-Eye of the Week distinction!

It doesn't take a rocket scientist to figure out that folks are using their dalliances with celebrities to earn themselves a "come up".


"Have a baby by me/Who the hell cares?/I'll write the check before the baby comes/Be a millionaire"


Rapper 50 Cent was only half-joking when he penned that line. After all, that's really all it takes anymore. If a man or woman wants to make a bunch of money in a little bit of time, they need only impregnate or get impregnated by the right celebrity and have their case heard before the right judge.

It makes me sad for the children. After all, how would you feel if you figured out that your parent who was an "unknown" suddenly became famous for being your parent AND got a huge windfall to go along with it. Something tells me that the side-eye baby Nahla is going to give her dad, is worse than any I could ever issue him! I'm certain that Kelis' son will raise an eyebrow when he looks at the fact that his mother hasn't bothered to make a song since receiving her windfall. I'll bet the farm that Kevin Federline's sons eventually figure out that the only way in which he has increased his net worth over the past five years has been in the role of their father.

Still, one has to wonder what in the world is on the minds of the judges who think this type of thing is okay. It's almost like they're playing Robin Hood in their quest to "rob" from the rich and give to the poor.

This reversal of fortune scares me. Thank GOD my "kids" are grown up now! Before I snag my movie deal, I intend to make certain that there is never an opportunity for anyone to try and make a come-up off of me!