Have you ever heard a song and found yourself INSTANTLY transported back in time? That's exactly what happened to me today when I heard an "oldie but goodie". I was doing some work while listening to some old music that I love and "I Believe I Can Fly" by R. Kelly came on. From the very first chords of the song, I was sucked into a time machine and found myself back in 1996...

I was back in the living room of my old apartment in Park Hill. I was in my twenties, had a newborn, a five year old and a seven year old, and I was unemployed. My marriage had ended and NOTHING about my life had gone as planned. You know how in our early childhood and our teens we sit down and map out what life will be like for us - where we'll live, what we'll drive, our careers and all those things? Well, NOTHING had gone as I had envisioned it. I had become a teen mother, which meant that my dreams of being the female Johnny Cochran were dashed. I had married my high school sweetheart and thought that I had found my Mr. Right, but he turned out to be my Mr. Wrong. I had never imagined myself as a single parent to three children, and yet there I was - living in a bad neighborhood, struggling to make ends meet, holding down a job that was beneath me, just trying to keep food on my table and our heads above water. I felt abandoned, frustrated, and I thought I was doomed to be a failure. I knew that I was smart, that I had a great personality, a vivid imagination and a way with words. But it seemed that none of those attributes would be put to any good use since I was stuck living a life that had no light at the end of the tunnel. I felt like giving up.

"...See, I was on the verge of breaking down. Sometimes silence can seem so loud."

Although I had friends, family, and even a church family, it seemed that folks were more content to talk about me than to actually offer me a shoulder to lean on. My relationship had not ended quietly, and there was a lot of fodder for the gossipers. Even at church, my daughter's Sunday school teacher had pulled her to the side and interrogated her about the state of my marriage! It seemed that everywhere I turned, I was either hearing muted whispers, the dreaded "I told you so"s or worse - the pity parties and sympathetic "I feel so sorry for you"s.  (I really HATE having anyone feel sorry for me. It's one of those things that sincerely disturbs me!) I was broke, single, bitter, weary, worn and SAD.

The more I thought about it, the more convinced I was that this was not the life I was supposed to be living. I knew that I had untapped potential just beneath the surface and yet it seemed like my life was destined to go in a terribly different direction. Still, there was a persistent voice in my head telling me to be patient, reminding me that it wasn't over yet, that there was more to come, that I must not quit.

"...There are miracles in life I must achieve. But first I know it starts inside of me."

The timing of that song's release seemed divinely inspired. This was exactly what I needed to pull me out of the funk I was in, to give me hope that things would get better. (As the years wore on, there would be other songs that seemed to be heaven-sent-special-delivery-just-for-me. "No More Drama" by Mary J. Blige is another example that comes to mind). It was as if God sent me a "message in a bottle" disguised as a song that would lift my spirits, give me courage, and push me toward my destiny. Indeed, the words to R. Kelly's song became my mantra and I began to sincerely believe that I could "fly" - that there was no obstacle I couldn't overcome; that indeed there was a light at the end of my tunnel and that my future might be brighter than I could even imagine!

I'm not sure why I decided to blog about this today. Maybe somebody reading this needs to hear this message. Maybe someone is at a point in their life when they feel unfulfilled, or beaten down. I'm offering my own experience as proof that if you believe in yourself and trust that God will see you through, anything is possible.

I smiled as the song came to an end with the choir singing the hook. In my mind, I was smiling at my 20-something self, knowing that I surpassed all of my wildest expectations. Hearing that song today it felt as if God was nudging me and smiling and saying, "See? Didn't I tell you?" I look back now and I see how far I've come:

Sometimes when we're in the midst of our "shit", we don't know why it's happening to US. We can't comprehend why the Universe has allowed such setbacks to occur in our lives. I certainly had no idea why I was faced with one seemingly insurmountable obstacle after another in my youth. But my journey is proof that someday it'll all make sense.

So BELIEVE that you can fly. And I promise you, you WILL. 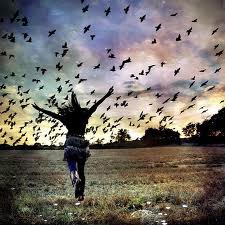 Posted by TracyBrown at 3:05 PM