"Spare the Rod, Spoil the Child"

﻿Recently, national bestselling author ReShonda Tate Billingsley caused a firestorm of controversy on Facebook when she posted the picture below. 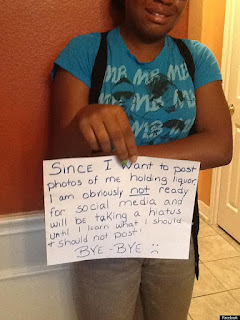 ReShonda's daughter (age 12) had posted pictures to her Instagram account of her holding an unopened bottle of liquor. Furious, ReShonda decided to teach her daughter an unforgettable lesson. She posted a picture online of her child holding a sign that read,


"Since I want to post photos of me holding liquor,
I am obviously NOT ready for social media and
will be taking a hiatus until I learn what
I should not post.
Bye-Bye :( "

The public's response was immediate. Many parents championed her as a fantastic mom. After all, aren't we appalled daily by the instances of parents who can't seem to control their children? How often are we complaining about teens who are out of control as the nightly news is filled with examples of "kids gone wild"? ReShonda's unique form of punishment was heralded by many as a mother's job well done. Genius! ﻿But, then came the chorus of naysayers.

"She should have just talked to her daughter."

"Discipline should be in-house and personal!"

"This is online bullying!"

"The liquor bottle was unopened!"

I found myself laughing at some of the comments that were posted by outraged adults who felt that ReShonda had done irreparable damage to her child. I put myself in her daughter's shoes and objectively asked myself if this punishment had gone too far. I came to one simple conclusion: I bet that child won't ever post an inappropriate picture of herself again!

Tough love isn't warm and fuzzy. But it is effective! After all, it is because we love our children that we punish them when they do wrong. The absence of discipline signals the absence of concern for our children's mental and physical health.

"Who cares if she was crying?" ReShonda Tate Billingsley demanded. "I've never seen a tombstone that said 'HERE LIES SUSIE. SHE DIED FROM EMBARRASSMENT'!"

Society has changed since I was a kid. Back in my day, "I'm gonna tell your mother" was the WORST threat any adult could level at you. No matter what, you did not want your mother to find out that you had been behaving badly. It meant severe punishment was on its way, whether that be in the form of grounding, spanking or even public humiliation. Parents would spank their kids, pluck them, pinch them, pop them in the mouth or whatever was necessary to keep them in line. They didn't wait until you were at home to do it. If you were in Pathmark and they caught you eating the grapes in the produce aisle, they'd slap your hand. If you were in church and had the audacity to interrupt them while they were speaking with another adult, you'd get popped in your mouth. If you got a note home from school about your disruptive behavior in class, you got a spanking so that you would remember to be good when you sat down at your desk the next day. Eventually, the physical discipline became so effective that all it took was a certain LOOK from Mama and we immediately got ourselves in line! That look became legendary because it held the promise of repercussions.

If you had the nerve to be disrespectful in public, parents didn't look around embarrassingly, hoping that no one overheard. Instead, they unleashed a verbal smack down that was guaranteed to make you wish you could disappear. EVERY ADULT was to be respected - including the crossing guard, the store clerk, teachers, neighbors and even strangers. If parents got wind that you ever disrespected an adult, it was ON! We feared our parents, respected them, and we didn't dream of provoking their wrath.

My room was not a "parent-free zone". In fact, my parents made it clear that they paid the bills and, therefore, they could go anywhere they damn well pleased, including into "my" room. I was very familiar with the word "no". If I asked to go to a house party and my parents didn't know the kid or the kids' parents, the answer was "no". If I asked to attend a co-ed sleepover, the answer was "no". If I wanted anything that cost more than $200 (aside from my tuition or school-related expenses), the answer was "no". And I didn't break as a result. In fact, I learned to live with disappointment. I learned that things won't always go my way, but that life goes on. My parents were not concerned about whether or not I viewed them as cool. They were not interested in being my friend. Their job was to raise me to be the best adult I could possibly be. And they did that, by any means necessary. On the rare occasion that I pointed out that "so & so's mother is letting her go!", my mother just shrugged and said, "Good for 'so & so'. But I'm your mother. And you're not going!" She didn't lose any sleep or shed any tears about it, because she knew she had my best interests at heart.

Something has changed in the years since then. Kids have managed to turn the tables and take control. Parents suddenly speak of their kids "right to privacy", not entering their children's rooms without permission. Mothers began to breastfeed their children all the way up through elementary school. Parents started losing their own social lives because their calendars became packed with the activities their kids would "need to boost their self esteem" - activities like soccer, football, dance class, martial arts and sometimes all of the above! Parents began to equip their small, elementary-school-aged kids will Blackberries, iPhones, iPads, and allowing them to have Facebook pages with private passwords (some parents are not even allowed to "friend" their kids on Facebook due to their kid's demand for privacy!), Twitter accounts which the kids block their parents from following, and Instagram accounts on which they post inappropriate content. Kids started demanding extravagant and expensive sweet sixteens, the cost for the average prom soared to nearly two thousand dollars per family, $250 Jordans went on sale and kids made their parents stand on lines for hours to get them! $500 headphones went on sale and parents scrambled to get their kids a pair, even when their child's grades didn't warrant such luxuries, even when the parents could not afford them. Mothers and fathers seem almost obsessed with being perceived as "cool", even at the expense of their children's long term well-being. 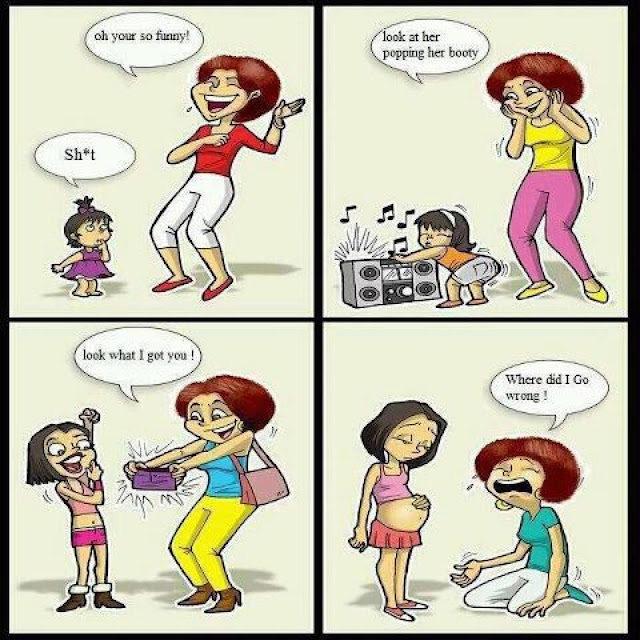 Recently, while discussing "One Day It'll All Make Sense" by the rapper Common, one of my book club members shocked the group while we discussed the parenting style of Common's mother. Common's mom declared that no child of hers would have 20 pairs of shoes if she only had two pairs for herself. While most of us agreed with that statement, one member strongly disagreed. She saw nothing wrong with her children having a lot more material possessions than she did, even though she was the one working for the money to buy such things. She explained that she enjoyed lavishing her children with things, even if it meant having far less for herself.

As a mother, I know how it feels to want your child to have everything his/her heart desires. However, I also recognize the importance of learning to accept "no" for an answer, the value of discipline and the need for structure. I have practiced tough love with my children, even to the point of having my daughter move out of my house when she was a rebellious and defiant teenager. I made it clear that she or her brothers could not live in my house if they insisted on not following my rules. That was one of the toughest decisions I've ever made as a parent. I worried that she would hate me, that she would feel abandoned by me. But I was wrong and it worked. Years later she told me that she learned a valuable lesson that year, and she thanked me for it. Now that she is an adult, she has sat back and observed my friends as they parent their younger children. And my daughter has marveled at what she sees as a lack of boundaries in many of my friends' relationships with their kids. Some of my friends let their kids curse freely. Others let their teens have sex in their homes. A few let their teens drink, get tattoos, smoke weed, get body piercings, go to nightclubs, and worse. My daughter sees this and tells me that she appreciates the boundaries I placed on her. Even though she's only in her early twenties, she shakes her head disapprovingly at the parenting skills (or lack thereof) exhibited by some of my friends and family members.

Children respect (and believe it or not, they actually want) boundaries. They need for us to tell them "no" sometimes, for us to set parameters in their lives. With kids knowing that parents can be arrested for spanking or hitting them, they are wielding that power like a sword, keeping Child Protective Services on speed dial. It's vital that parents come up with creative ways to discipline their kids, just as ReShonda did.

"The more I hear this story, the more I like what [ReShonda Tate Billingsley] did!" said Dr. Drew Pinsky.

And I couldn't agree more!

For more on this controversial story, visit http://www.hlntv.com/video/2012/05/23/mother-punishes-daughter-facebook