The Choice is Yours

Over the past year, I've spoken several times to students at my former high school. My goal is to motivate young people who are up against all sorts of seemingly insurmountable odds. I tell them my story, explain how I made lemonade out of the lemons that I had to work with, and I encourage them to do the same.

It's not easy getting the attention of a room full of high school students. Usually, when I step into the classroom, the teachers are struggling to get the students under control. The students, themselves, are usually so full of energy and laughter that it takes them a few moments to settle down. They assume that I'm there to give them another boring lecture about some topic in which they have no interest.

Once they settle down a little, I usually start by explaining that I once attended the same school. Then they begin to try and guess the year that I graduated. When I tell them that I was part of the class of 1992 they are shocked (and my ego is sufficiently stroked! LOL).

I go into the details of my story - a straight A student who fell for a guy who said all the right things, cut class most of my freshman year, was pregnant by sophomore year, and was told by one of my favorite teachers that I had blown my chances of being anything in life and that I would be little more than a welfare recipient and a failure for the rest of my life. I tell them how I was whispered about in the school's hallways by students and faculty alike, and how I used that teacher's negative forecast of my future as fuel to push me toward excellence. Instead of being ashamed of my actions and believing that what that teacher said was a true indication of what my future held, I decided that I would prove her and everyone else who had doubted me wrong. I tell them how I worked my ass off to finish high school, how I studied harder and took extra classes and managed to graduate on time with the rest of my high school class. I tell them that I went on to college, though I didn't finish due to lack of sufficient child care. I tell them about the jobs I've held over the years, about sitting down to write my first novel and getting it published. I tell them about the career that has blossomed since then, about the eight novels and two anthologies on shelves worldwide.I tell them that none of my classmates or teachers (or even I) could have possibly imagined that out of all the graduates from the class of 1992, that Tracy Brown would be invited back to motivate and encourage the students. And then I have their undivided attention.

There's power in hearing that someone walked the same path as you, tripped over the same obstacles, fell into the same ditches, climbed their way out and made it to the other side. It gives you hope that you can do the same thing. So when I speak to the students (some of whom are still being told by uncaring teachers that their futures are hopeless), and I tell them that I was once just like them, living in the same neighborhoods, going to the same school, facing the same odds, they listen. They are hopeful that they, too, can defy those odds and make successes of themselves. My message is clear: Life is not always an easy straight path to success. There are often bumps in the road. But it's how you deal with those problems that determines whether you are a success or a failure. The choice is yours.

When I tell the story of the teacher who said that I would be on welfare for the rest of my life, the students I speak to are usually outraged.

"I would have punched her in her face!" they say.

"I would have cursed her OUT!"

"I would have cut that bitch!"

I laugh and tell them that I was tempted to do all of those things. But, if I had, I would have only been feeding into her perception of who I was. She would have been justified in her belief that I was just another statistic. Instead, I chose to prove her wrong. I decided that I would work so hard that someday I would make her eat her words. Instead of fighting her with fists, I fought back with my intellect. And I won. Today I am the opposite of what she forecasted. I am more than she ever imagined I would be. And I tell the students that they can - and should - fight back in the same way.

As an adult, I'm amazed by the number of my peers who are still affected by some hurt, some pain from long ago. They are bitter, angry, insecure, co-dependent, "woe is me" types who can't (or won't) move past the things that someone said, or did, or didn't do a long time ago. I have very little patience for that type of self-pity. Especially because my own life has not been anything close to perfect. I've had issues with a parent, been in relationships that ended badly, had to make it as a single parent, been betrayed by friends, been fired from a job, dealt with the death of a parent, handled being disappointed by a child, been broke, been talked about, seen people die, seen my share of hurt and pain and hardship. And I still manage to get up everyday with a smile on my face, and an attitude of optimism. When life throws a hardball at me, I've learned to either duck out of the way or to plant my feet and catch it with both hands. But moping about it, dwelling on it, allowing it to consume me...those are never options.

None of us gets through life without facing adversity. The storms of life are guaranteed to blow. How you react to those storms will make the difference between being victorious versus being defeated; being happy versus being miserable (and in turn, making those around you miserable as well); being
a success versus resigning yourself to failure.

People will try to speak negativity into your existence. Haters will pray for your downfall. So called friends will laugh at your ideas. Those who lack vision will tell you that your dreams are impossible. Naysayers will count you out before you even get started. It's up to you to prove them wrong. When you're miserable and dwelling on something negative that's happened to you, there is no room for your blessings to pour forth. CHOOSE to THRIVE in spite of your childhood traumas, failed relationships or old friendships. Turn your negative experiences into positive turning points.

In the infamous words of Mary J. Blige, "It's up to us to choose whether we win or lose. And I choose to WIN!" 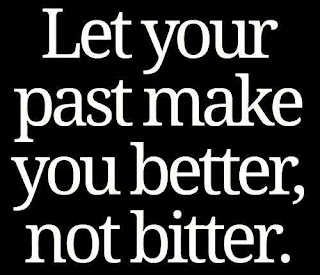 Posted by TracyBrown at 5:02 PM