Listen to Your Mama! 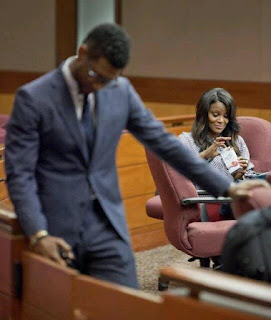 If the average picture is worth a thousand words, the one above is surely worth twice that! We see a broke-down-looking (though still oddly attractive) Usher in an Atlanta courtroom looking forlorn, while in the background we see his estranged wife Tameka smirking with an expression of utter satisfaction on her face. The two of them are embroiled in a messy custody battle for the couple's two young children. The proceedings have been televised, capturing each cringe-worthy moment. Usher has cried on the witness stand as he defended himself against allegations that he is a bad father. The public has been given all the sordid details of the couple's brief marriage and their tumultuous split. He claims that Tameka spit on his new girlfriend, that she tried to fight the woman, that there was a plate of food tossed at his car, and blows were thrown. Usher claims that he had to wedge himself between his wife and his girlfriend, that Tameka called the woman a bitch while promising to kick her ass. Tameka claims that Usher is a hard-partying, drug-using, absentee parent. Tameka wants full custody. Usher wants increased visitation rights.

Many of us sympathize with Usher. After all, Tameka was his stylist, a married mom of three, and significantly older than Usher when the two of them got together. It appeared that she had hit the jackpot, and many thought that Usher's decision to marry this "seasoned" cougar was a mistake. A chorus of cryptic warnings rose up, begging him to rethink his decision. But no voice in that chorus rang louder, clearer or more urgently than that of his own mother.

Usher's mother had managed her son's career since its inception, and was reportedly outraged by his decision to marry Tameka Foster. Ignoring his mother's pleas, Usher went ahead with his plans anyway. A huge ceremony was planned, and all the A-listers of the music and entertainment industry were invited. But in what I perceived as a very gangsta move, Usher's mother refused to attend the ceremony, effectively boycotting her son's nuptials. While all of Atlanta's elite gathered for a star-studded ceremony, Jonetta sat at home in her pajamas and prayed that her son changed his mind. A heartbroken Usher called off the wedding at the last minute, crushed by his mother's absence. But then, in an act of defiance, he and Tameka eloped and he married her anyway. His mother was just gonna have to get over it!

Soon, Tameka was popping out babies, Usher was singing "There Goes My Babyyyyyy", and Usher's mama was shaking her head and sucking her teeth.

Not long after, radios worldwide were blasting his hit song "OMG". While this should have been one of the high points in the musician's life - a new wife, new sons, great career - his happiness was overshadowed by complications Tameka suffered while undergoing plastic surgery. Usher raced to Brazil to be by her side. But that wasn't the only problem the couple was facing. Shortly after their marriage, Usher fired his mother as his manager. The response from the public was vicious! Fans hated Tameka, bloggers wrote negative stories and posted unflattering pictures of the woman most labeled as a golddigger. Tameka began nagging Usher to defend her publicly. He did, announcing on BET that he loved his wife, blah, blah, blah. But no one was buying it. America gave Usher the collective side-eye. We were all able to see what Usher couldn't see for himself - their union was doomed from the start. While we watched and waited for the inevitable separation, Usher's mama did the same.

It didn't take long. Usher came to his senses and realized that his mother had been right all along. He filed for divorce and released a song announcing that he was "...ready to sign them papers"! Tameka wasn't about to just fade to black, though. She was just getting started.

The troubles between Usher and his wife have played out in the press for quite some time now. The recent court battle is just the latest chapter in an ongoing saga. Twitter followers have seen their tweets blasting each other. Entertainment news is abuzz with all the drama between the former couple. My heart goes out to him. But, NONE OF THIS would be happening if he had only listened to his mama!

It's an age old story. The more our parents tell us not to do something, the more enticed we are, the more determined we are to defy them.

When we were little kids, we thought our parents had all the answers. Look in any preschooler's eyes as he/she asks her parents, "Why is grass green?" or "Why is the sky blue?" and you'll see the wonder, the trust, the reverence in those eyes. Whatever answer the parent gives is accepted by that child, because he/she believes that their parents are always right.

But once we reach adolescence, something changes in us. Suddenly, we doubt everything our parents tell us.

Parent says, "No drinking at the party. I don't care who else is doing it, YOU better not drink."

Parent warns, "Don't be in such a hurry to have sex. Boys will say anything just to get in your pants."

Teen decides, "Mom's just jealous. She doesn't get him the way that I do. Me and my boyfriend will be together for LIFE!"

Eventually, we begin to see that our parents are usually right. However, some of us are still defiant, even resentful, about our parent's foresight. Even as adults, some of us are rebellious and we ignore sound, sage advice in favor of charting our own course. And the result is what Usher is enduring now - we are forced to learn lessons the hard way.

If I had listened to ALL the advice my mother(s) gave me over the years...("Don't get pregnant."  "Don't hang around with her." "Don't marry him." "Don't spend that amount." "Don't quit that job." "Don't trust that girl." "Don't lend that money." )...I would have saved myself a LOT of headache and heartache. And now that my own children have reached or are approaching adulthood, I find myself seeing situations much more clearly than they can. It's easy for me to recognize the girls who have bad intentions, the friends who are envious, the relationships that are unhealthy. I issue my warnings, and wait to see what they do. Sometimes they listen, knowing that I've gained a ton of wisdom over the years and that I've learned a lot of lessons during my lifetime (most of them the hard way). But there are times when they don't listen. And as I watch them dealing with the repercussions of being hardheaded and stubborn, I try to remind myself that I was young and naive once, too. I try to be patient and remember my own days of defiance. And I do my best to get them back on track.

Mothers are blessed with wisdom, the power of discernment and a killer instinct! I bet Usher - like many of us - would give anything to rewind the clock and get a do-over. And I bet THIS TIME, he'd listen to his mama! 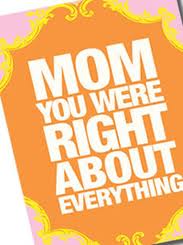 Posted by TracyBrown at 2:49 PM